Simplest review ever: Ghostbusters: Afterlife is as good as 2016’s Ghostbusters reboot was bad. That was easy. Everything about the latest incarnation of the original Ghostbusters saga is perfect. The writing and directing by Jason Reitman, son of the original film’s director, Ivan Reitman, is fresh, clever and logical. It’s a breath of fresh air after that 2016 reboot … END_OF_DOCUMENT_TOKEN_TO_BE_REPLACED 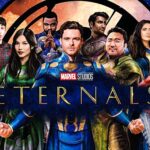 The Eternals ranks with the best of Marvel Universe movies and ushers in a new era of films. There was some concern about a new film that introduces so many new characters into the already crowded Marvel universe, but the fears are unrealized. The Eternals, based on Jack Kirby’s 1976 comic series, takes the writer’s work and collapses it into a 157-minute classic that … END_OF_DOCUMENT_TOKEN_TO_BE_REPLACED

The latest interpretation of the massive Frank Herbert novel, Dune, is a sprawling epic about greed, ambition and the cruelty of destiny. While the film is beautiful and the acting impeccable, it is hampered by a ponderous first act that weighs down the entire film. Director Denis Villeneuve (Bladerunner 2049 and Arrival) tried mightily to bring the novel to the screen … END_OF_DOCUMENT_TOKEN_TO_BE_REPLACED

Venom: Let There Be Carnage has everything a comic-loving moviegoer could ask for in a sequel: a logical story, well-placed humor, excellent acting, and brilliant special effects. In a nutshell, it’s as good as the first movie, Venom, was bad.  Sony Pictures, clinging to its tiny piece of the Marvel movie empire, had the courage to release the sequel during a pandemic, which … END_OF_DOCUMENT_TOKEN_TO_BE_REPLACED

Shang Chi and the Legend of the Ten Rings is Marvel’s latest foray into the new cinematic cycle without powerhouse actors like Robert Downey Jr., Scarlett Johansson, Chris Evans – and it is a masterpiece. Shang Chi, a stalwart hero from Marvel Comics since his introduction in 1973, has been through many changes -- including the cancellation of his own series – and … END_OF_DOCUMENT_TOKEN_TO_BE_REPLACED

Art of the Day… Random Face and All!!!

Here’s you amazing art fix for the day!!! Enjoy!

So many characters so little feet!! Seriously how

Art of the Day!!! If the Hogpog Nation can do it o

What’s up comic nerds??? Best day of the week th

New comics this week!! Come in and see us!!

This weekend come see us in Akron!!! http://www.ak

Processing books for the show tomorrow. Come see u

New comics today!!! Best day of the week!!! Come a